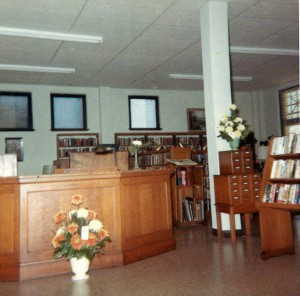 A large crowd attended the 50th Anniversary of the Akron Carnegie Public Library which was observed on Sunday afternoon, October 24, 1965 with “Open House” from 2:00 p.m. until 5:00 p.m.  The merchants displayed yellow streamers on their windows announcing the event.  As you approached the library, the urns filled with yellow mums at the bottom of the front steps looked quite lovely. 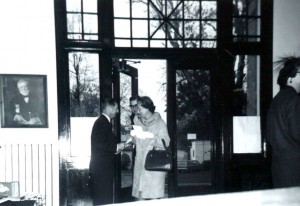 Harold Groninger, Library Trustee, greeted the guests and gave each one a brochure which contained a
picture of the library and brief history of the library, names of the 1915 Librarian and library board, and present Librarians and library board and a memorial tribute to Mr. and Mrs. Clyde Marine.  A gold colored bookmark was inside each brochure.

A bronze plaque, which has been hung on the wall in memory of Clyde Marine, whose wife Rose left a $5,000.00 Trust Fund to the Library in his memory, was on display for the first time.

The new floor and ceiling of the library were both greatly admired. 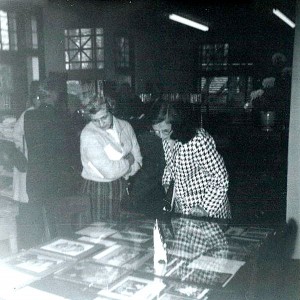 The guests viewed the many displays of old pictures which were placed under glass on the reading tables.  The glass was loaned by Day Hardware.  Each picture had a caption naming the event and persons in the picture.  There was a display of babies born in the Akron Community in 1915, weddings of 1915 and other important events in the Akron community in 1915.  There were many other pictures of early Akron.

Randall Leininger, Library Trustee, had charge of the Anniversary books which were sold for $1.00 to cover printing costs.  These were attractive gold colored books which contained a History of the Library with a picture section.  Donations were received from the Akron Exchange State Bank, Akron Chamber of Commerce, Sonoco Products Co., Akron Lions Club, Akron Woman’s Club, Kappa Delta Phi Sorority, Mrs. Fannie Moore, Chamberlin Products Corp. and the Pike Lumber Co. which made the printing of the book possible. 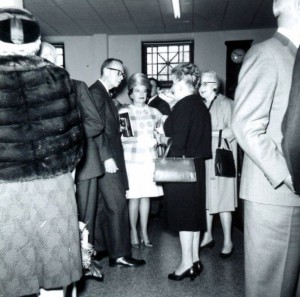 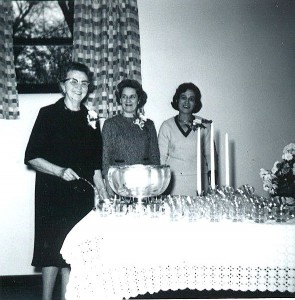 Punch and cookies were served by Mrs. Fannie Moore and Mrs. Joe Bahney, Library Trustees, from a table covered with a white handmade lace cloth over yellow.  The lace cloth was made by Mrs. Joe Hoffman after she was 82 years old.  A centerpiece of mums was flanked by candelabra.  Mrs. Harold Groninger, Mrs. Clair Ellis and Mrs. Randall Leininger assisted in the serving.  Mrs. Herbert Byrd, Library Trustee, acted as hostess in the Social Room.

Yellow carnation corsages and boutonnieres were worn by the Board Members, Librarians, Mrs. Kuhn and Mrs. Fultz.

Pictures were taken during the day by Bill Kinder.

Many out of town guests were present.  Mrs. Cecil Kuhn of South Bend, the first Librarian and Mrs. Dessa Fultz of Rochester, the only living member of the first library board were present.  Mrs. Robert Zellers of Rochester, former assistant librarian and the following board members were present:  Professor Walter Haldeman of Anderson, Mrs. Albert Chipman of Plymouth, Earl Arter, Mrs. Loa Morris,  Mrs. Evan Whallon,  Rev. D. L. Slaybaugh and Ralph Rader.

As the 4th of July came on Sunday in 1965, a big celebration was held in Akron on Monday, July 5th.  The library was represented in the large parade at 11 a.m.  Members of the library board rode in a convertible.  The librarians, Velma Bright and Gloria Bowen dressed in clothes appropriate to fifty years ago and rode in the back of the car.  The library float followed.  The float was decorated with yellow roses commemorating the fifty years of library service to the community.  The Story Book Fairy, Sheila Leckrone, stood over the open story book which contained “Little Black Sambo” (Peggy Woolley); “Old Mother Hubbard” (Kay Kinder) and “Rip Van Winkle” (Scott Slaybaugh).  At the back of the float Steve Fleck, Cheryl Fleck and Janet Bowen (who is now the current library director) sat under a tree reading books.  “Akron Carnegie Public Library, 1915-1965”; “Open Your Future:  Read” and “50 Years of Progress” were captions used on the float and car.  The third prize of $15.00 was presented to the library for the float. 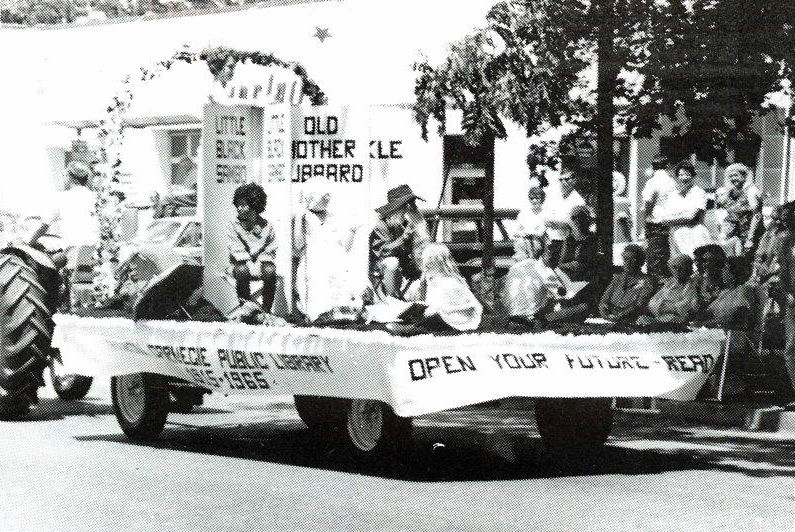 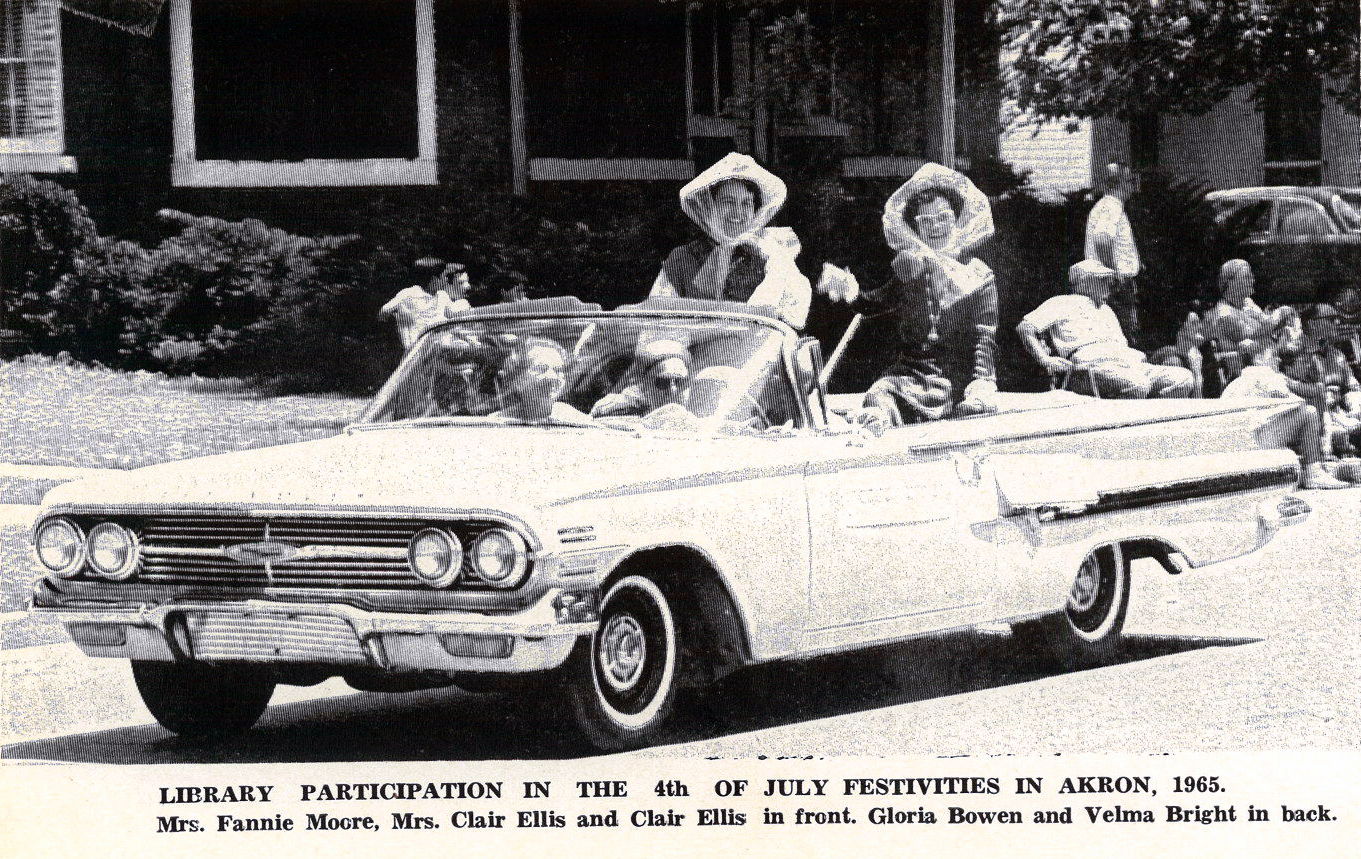