October 21, 1950 was an outstanding day in Akron, Indiana, as it was the 35th Anniversary of the Library. On October 21, 1915 the Akron Carnegie Public Library opened its doors to the reading public.

The 35th Anniversary celebration had been planned weeks ahead. On this particular day, streamers announcing the anniversary were in every store window and a book display with a poster reading “Do you know there is a Public Library in your town?” was featured in the News Office window.

The Curio Case was filled with interesting hats, shoes, purses, and old books. Most of the hats and shoes were of the 1915 era, but some were 100 years old.

Pictures of interest to Akron were on display on long tables and these were covered with glass which was loaned by the Leckrone Hardware Store. Other displays of pictures, included pictures of babies born in Akron in 1915, weddings of 1915, pictures of Board Members and Librarians to the present time. A display of books which were 1915 best sellers was placed on a small table along with a kerosene reading lamp, stereoscope, Bible and a plush family album. In the Children’s Department there was a display of Huckleberry Finn which was made by Miss Bright. It consisted of Huckleberry Finn which was a doll sitting on a rock beside a pond fishing. Cattails were in the background. 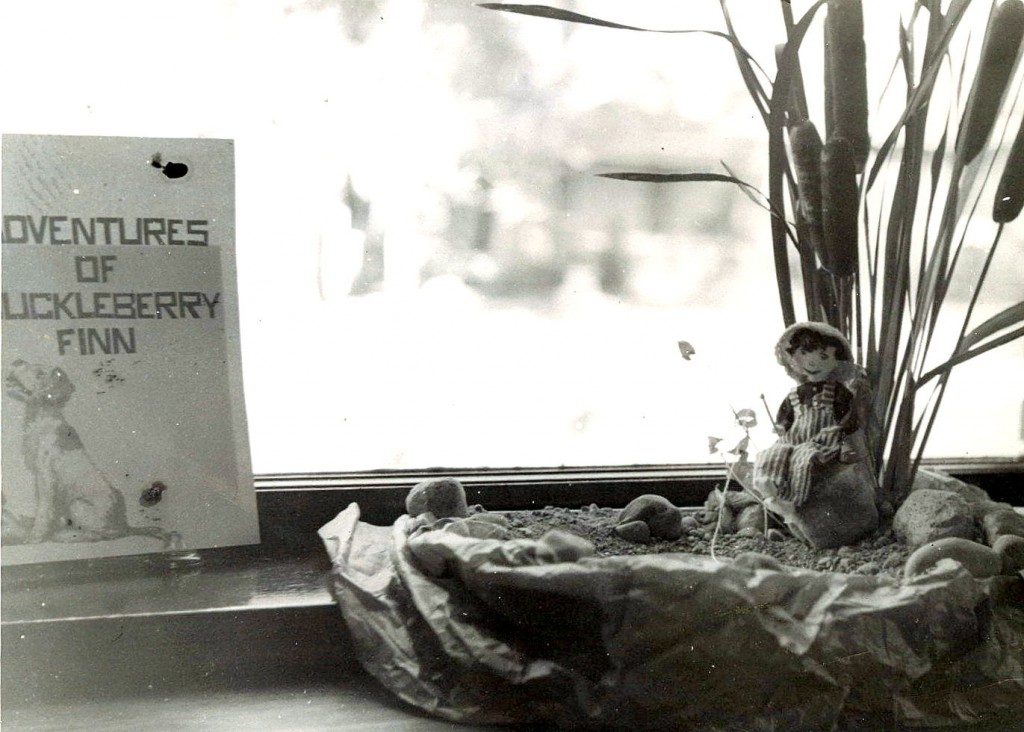 After the guests had seen all the displays they were registered by Velma Bright, Librarian. Then they went to the basement where Mrs. Gilbert Scott, Board Member, and Mrs. Ray Bevington received the guests. They were served punch and wafers from a beautifully decorated table carrying out an autumn theme. The hostesses were Mrs. Al Price, Mrs. Tom Gast, Mrs. Al Jennens and Mrs. Ray Bevington of the Kappa Delta Phi Sorority, who wore costumes of the 1915 period. 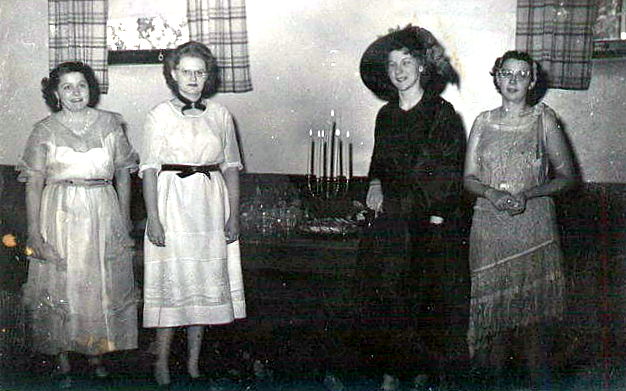 The basement room was attractively decorated with fodder, pumpkins, bittersweet, gourds, plants, etc. On the stage there was an interesting display of old clothes and a lace parasol of the gay ‘90’s period. The decorating committee was composed of Mrs. Ray Bevington, Mrs. Karl Gast and Mrs. Cozette Higgins. The decorating and food committees were ladies of the Akron Mothers’ Study Club.

Mrs. Desse Fultz of Rochester was among the guests. She was on the Library Board for 27 years. 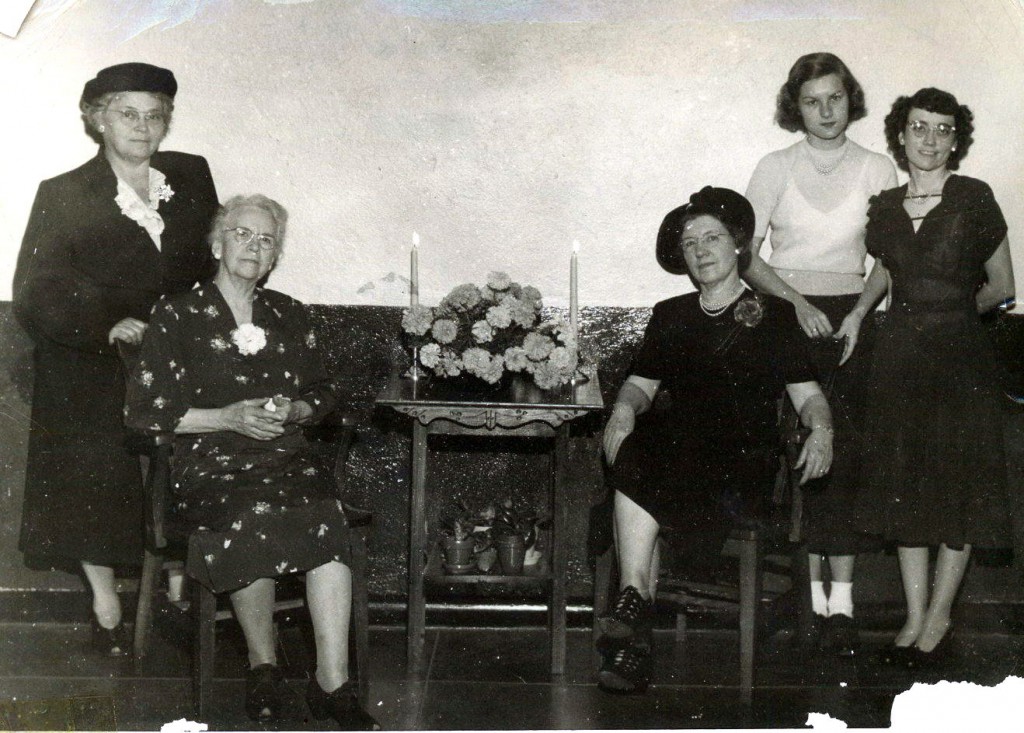 Flowers were sent by different individuals to be used in decoration and a lovely bowl of red roses was sent by the W.C.T.U., and a large basket of large white mums and red carnations was sent by the Akron Exchange State Bank. The day proved to be one that would long be remembered. 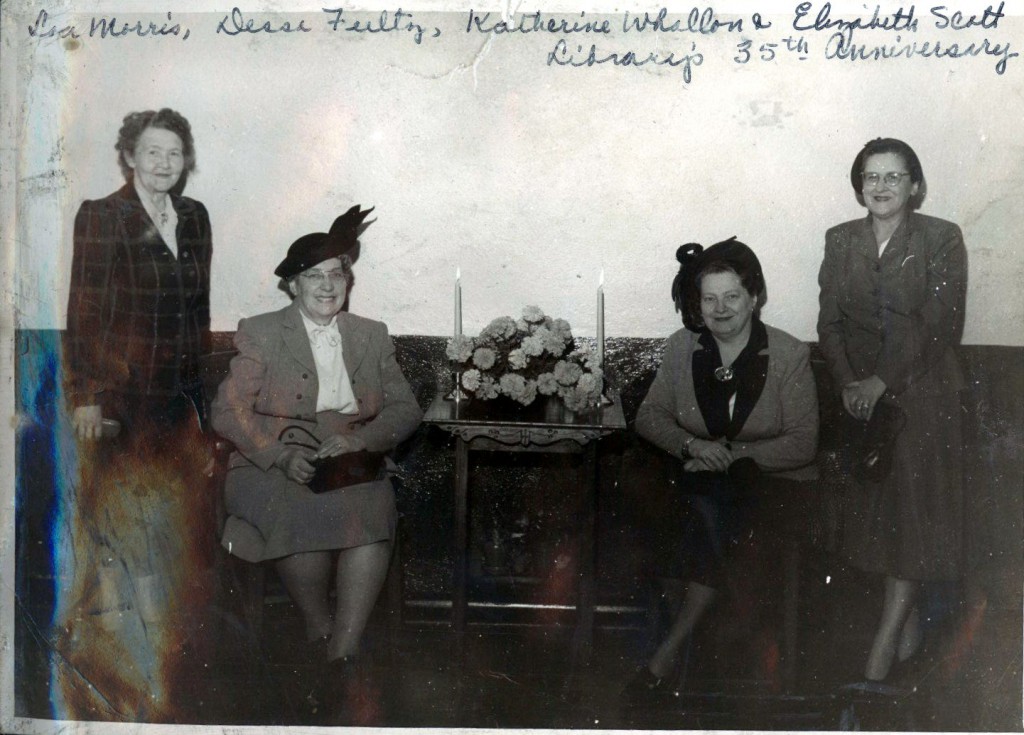 “Open House” which was held on Sunday afternoon, April 10, 1960 at the Public Library was a real success.

The library took on a new look. As the visitor entered the lobby they saw the lovely new green loveseat, persimmon barrel chair and the oaktone table with a lovely white table lamp. A large basket of mums added beauty to the entrance. 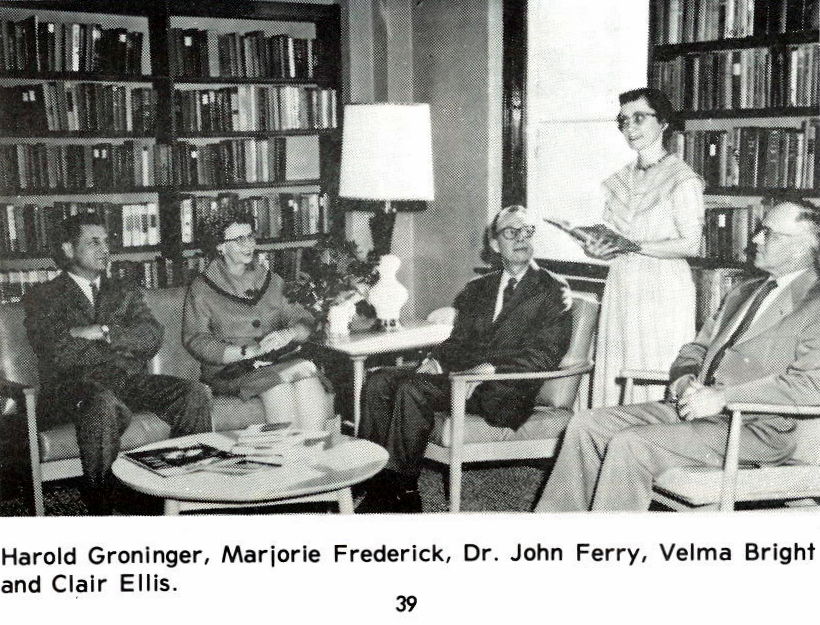 The Mahogany paneled office with the planters filled with green plants added beauty to the interior. A pot of red tulips graced the Reading Lounge, and a lovely red rose was placed on the loan desk.

The Elvah Ferry Children’s Room has new round tables with matching chairs and new shelving. A lovely picture of the late Elvah H. Ferry hangs on the wall in this room.

Ernest Smith, Secretary of the Library Board, greeted guests and gave each one a printed brochure containing pictures of the library and the late Elvah H. Ferry. Clair Ellis, Library Board President, and Velma Bright, Librarian, acted as host and hostess for the event. Harold Groninger, Board Treasurer, registered the guests.

In the basement of the Library refreshments of punch, coffee, cookies and mints were served from a table covered with a delicate pink tablecloth with a centerpiece of white gladioli, blue iris, and pink carnations and a candelabra on either side. Mrs. Joseph Bahney, Vice-President of the Library Board, served punch. Mrs. Paul Bowen, a member of the library staff, served the coffee. Mrs. Clair Ellis, Mrs. Harold Groninger and Mrs. Ernest Smith assisted with the serving.

The new furniture for the Children’s Room and the Adult Reading Lounge was given to the Library by Dr. Ferry and Mrs. Frederick in memory of their mother, the late Elvah H. Ferry. The Kappa Delta Phi Sorority and M.L. and Lillian Mullins of Whiting gave contributions of money toward the purchase of lamps. The flowers for the occasion were given by the Akron Exchange Bank and Mr. and Mrs. Dale Sheetz.